The Royal Bank of Scotland was founded by Royal Charter on 31 May 1727.  The new bank opened for business in Ship Close, Edinburgh in December 1727 and some time later began issuing its own bank notes, a practice that continues today.  On the first anniversary of its foundation the bank invented the overdraft and its first branch out with Edinburgh was opened in Glasgow in 1783. 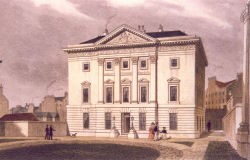 Today’s RBS and its brands are made up of hundreds of past banks. They were all different – large and small, city and country, traditional and innovative – and grew to serve the banking needs of unique communities all over the United Kingdom. Each one has left its mark on the bank’s identity today.