The Hongkong and Shanghai Banking Corporation Limited is the founding member of the modern HSBC Group. The company opened in Hong Kong on 3 March 1865 and in Shanghai one month later. 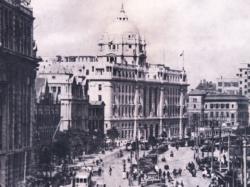 Its founder was Thomas Sutherland, the Hong Kong Superintendent for the Peninsular and Oriental Steam Navigation Company.

HSBC’s founding board was multicultural right from the start, including men of Scottish,German, Indian, American, English and Norwegian descent. It was international in its business scope and customer-focused in its approach; the early response from customers in Hong Kong and Shanghai was positive.

HSBC began issuing banknotes in Hong Kong and China in 1865 to stimulate and accelerate trade. The notes were easier and more practical to use than silver (which was bulky and required testing and weighing at every transaction) and were trusted by local merchants as a stable and secure currency unit for transacting business. The bank also issued notes in Japan, Singapore, Penang, Thailand and seven cities across China.

By 1900, HSBC was operating in 16 countries and financing trade across the world. The branch network in Asia now extended to Singapore and to cities in present-day Malaysia, Myanmar, Sri Lanka, Vietnam and Indonesia.

In the years leading up to and immediately following the First World War, HSBC looked to consolidate and expand within its Asian markets. In Singapore, the bank’s main business was the financing of rubber and tin, which were the port’s most important exports.

The 1950s was a decade of transformation in Asia, and HSBC had to respond nimbly to the ever-changing business environment.

In 1992, in one of the biggest banking acquisitions in history, HSBC closed a deal with the UK’s Midland Bank that would finally deliver the European piece of the global jigsaw. As part of this purchase, HSBC agreed to move the head office of its newly formed holding company to London to meet the requirements of the UK regulatory authorities.

By the end of the 1980s, HSBC was a financial powerhouse in the Asia-Pacific region with a strong foothold in the US market. It needed a European element to transform the bank into a truly global operation. 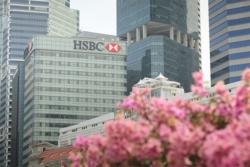 The 1990s and 2000s saw the further expansion of HSBC’s footprint, especially in the emerging markets of Latin America and Turkey and the mature economies of France, Switzerland and the USA. To bring clarity to customers, investors and staff, HSBC introduced a unified brand for all its subsidiaries in 1998, and the hexagon symbol was rolled out across the world.