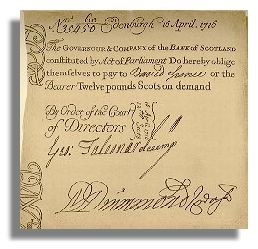 The first Scottish bank to issue banknotes was Bank of Scotland. When the bank was founded on 17th July 1695, through an Act of the Scottish Parliament, Scots coinage was in short supply and of uncertain value compared with the English, Dutch, Flemish or French coin, which were preferred by the majority of Scots. The growth of trade was severely hampered by this lack of an adequate currency and the merchants of the day, seeking a more convenient way of settling accounts, were amongst the strongest supporters of an alternative.

Bank of Scotland was one of the first Joint-Stock companies in Europe which was not Government sponsored and was granted a monopoly over banking within Scotland for 21 years. Immediately after opening in 1695 the Bank expanded on the coinage system by introducing paper currency.

This idea was first viewed with some suspicion. However, once it became apparent that the Bank could honour its "promise to pay" and that the paper was more convenient than coin, acceptance spread rapidly and the circulation of notes increased. As this spread from the merchants to the rest of the population, Scotland became one of the first countries to use a paper currency from choice.

Many other, very small, note issuing banks were set up, most of whom issued notes for quite small amounts. This was regularised by legislation in 1765 which said that the smallest bank note to be issued was the one pound note. There was a short departure from this during the Napoleonic Wars when notes for five shillings were issued. Notes for one guinea (21 shillings) were issued by The Royal Bank from 1758 until 1828.

The first notes were bound in books rather like a modern cheque book, but without perforations. The user would cut them out with a knife or scissors. Impatient users might perhaps just tear them out.

Each twenty shilling note (one pound) was in circulation about nine months, a very similar life expectancy to today's £1 notes.

Early notes were printed in black only. It was not until September 1777 that The Royal Bank of Scotland pioneered the use of colour in banknotes with a blue rectangle displaying the words 'one Guinea' and the King's head shown in red. Colour did not come into wide scale use until nearly a century later. Banknotes were originally printed on one side only.

Banknotes provided a crucial part of the currency of Scotland and, in the 18th and early 19th centuries, competed vigorously with coins. There were times, for example, when £1 notes were torn into halves and quarters and were accepted as the equivalent of 10 shillings (50p) or 5 shillings (25p) in coin.

Attempts to prevent forgery from a skilled engraver were certainly not on the scale of today's complex designs. The main deterrents were a water-marked paper, a mezzo-tint portrait of George II, an embossed bank seal and the signature of the Cashier. The accepted Scots punishment at that time of death or amputation of hand and/or tongue may have proved more effective!

Stamp Duty was first levied on bank notes in 1783. At first the Stamp Duty related only to notes over one guinea but by 1800 it had to be paid on every banknote. Under the Act the paper had to be stamped before each note was printed. Stamping the paper was a lengthy process as it involved the Scottish banks travelling to the Stamp Office in London. In 1808 the Scottish banks were granted the concession of issuing their notes on unstamped paper and paying the duty in a lump sum. 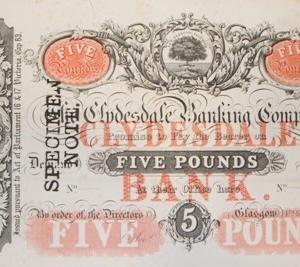 The greatest threat to the issue of the Scottish £1 notes arose in 1826. In February of that year an Act was passed forbidding the circulation of notes under £5 in England. The threat to the £1 notes - the only paper currency familiar to the great masses of the Scottish people - aroused widespread criticism. Sir Walter Scott's pen came to the defence of Scottish banking. Members of Parliament, the Press and a host of pamphleteers clamoured against conforming to the English style. A commission was set up and after full investigation it was decided to leave the note issues of Scotland (and Ireland) on their old footing.

In 1844, after a period of severe financial crisis, Sir Robert Peel took advantage of a review of the Bank of England's Charter to regulate the issue of notes. The Banknote (Scotland) Act, passed in 1845, allowed the banks to issue notes to the extent of the average circulation for the year to 1st May 1845 without any backing of coin or security, with the balance over that amount having to be covered at the Bank of England.  It was the 1845 Act that regulated note issue by Scottish banks until the passing of the Banking Act 2009.

Today, the combined circulation value of notes issued by the authorised banks in Scotland is in the region of £3.5 billion.  In accordance with the terms of the 2009 Act and the associated Banknote Regulations and Rules, issuing banks require to fully back their notes at all times with ring-fenced assets held partly in Bank of England notes and UK coin and partly in deposits held at the Bank of England.  This,  of course, means that holders of banknotes issued by the Scottish banks receive the same level of protection as that provided to holders of Bank of England notes. 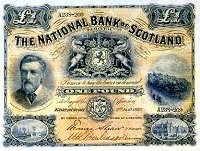 Although no longer in general circulation, banknotes issued by organisations such as the Union Bank of Scotland, North of Scotland Bank, Commercial Bank of Scotland, the British Linen Bank and many more, are now collectors' items.  These and other banks have been absorbed into the present three note-issuing banks by a process of merger and takeover in the latter half of the 20th century.  While these notes continue to be honoured by the present-day banks, they are often worth more than their face value to collectors. The three note issues remain popular and some banks, from time to time, issue specially designed commemorative notes to mark, for example, a special anniversary or notable achievement.

Alongside the right to issue its own notes goes the responsibility to dispose of them when they have completed their useful life. The notes used to be burnt, under strictest security and in quantities often exceeding £1 million, at the Banks' Head Offices. In these days of more environmental awareness the notes are now granulated and the paper is recycled.