Bank of Scotland is part of Lloyds Banking Group, the UK's largest retail bank and Scotland's largest financial services employer. Founded by an Act of the Scottish Parliament in 1695, Bank of Scotland is the UK's oldest surviving clearing bank and was the first bank in Europe to successfully issue paper currency. 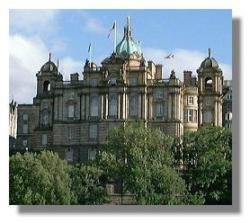 The Group's historic headquarters building on The Mound has been a familiar part of the Edinburgh skyline for 200 years. The Mound went through a major restoration programme, completed in mid-2006. The Mound is also home to The Museum on the Mound, one of only three banking museums in the UK. The museum is open all year round and entry is free of charge.

Bank of Scotland produces some of Scotland's most authoritative and established economic research which draws on the expertise of its in-house economists and external market researchers.  Regular research includes reports on prevailing conditions in the Scottish economy, labour market and the housing and savings markets.

The Bank of Scotland Foundation is an independent charity working with charities across Scotland supporting people and their local communities. The Foundation receives an annual donation of £1m from Lloyds Banking Group to fund the Foundation's Small Grants Programme and Staff Matched Giving Scheme.